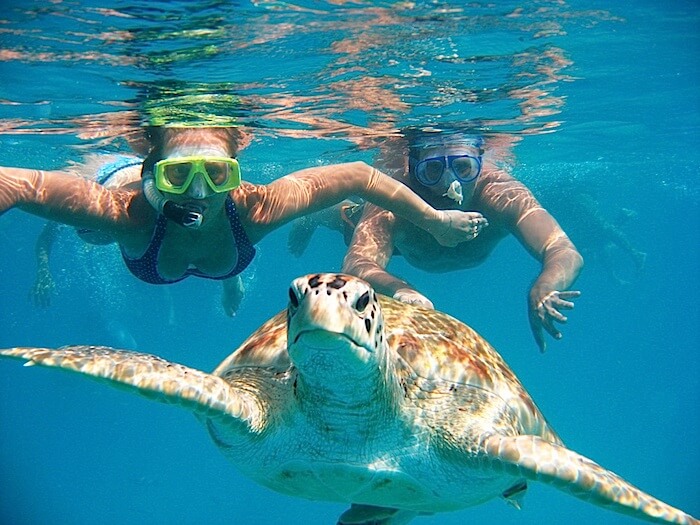 The best snorkeling spots in Tenerife

February 18, 2017By Tenerife HostPosted in Excursions in Tenerife

Snorkeling is one of the popular things to do in Tenerife. There are a few companies in Tenerife offering snorkeling tours. Even Tenerife is not such a kind of paradise for snorkeling as the famous snorkeling destinations in the world, mainly because the water become nearly immediately deep, but that doesn’t mean there are no snorkeling sights in Tenerife.

Here we’re going to introduce you the best snorkeling spots in Tenerife.

Long-long time El Puertito was the most popular snorkeling spot in Tenerife mainly because of the turtles. There were living a family of big green turtles and it was working as a kind of magnet for tourists and local tour companies doing snorkeling tours. The turtles spend most of their time on the seafloor may be 10 m down, but the water is so clear that you can see pretty well. However, every few minutes the turtles need to come to the surface to get a new breath of air, so all you have to do is snorkel above the turtles and wait for them to start swimming up, and you will have one right in front of you.

The sad part of the story is that most of the turtles were killed one night two years ago by some mad tourists. People say they were Russians, but nobody has been arrested and nobody can prove that. The only fact is true – it is not so easy to see green turtles in El Puertito now. Moreover, El Puertito receives a few hundred visitors daily both from the shore (people who try to snorkel by themselves and organized cheap tours offering snorkeling from the shore) and from the yachts and catamarans doing boat trips with snorkeling included from Puerto Colon and doing a swimming and snorkeling stop in El Puertito.

Well, El Puertito is still the perfect choice for snorkeling, if you don’t mind a lot of other people are snorkeling nearby, but there are also other less known perfect destinations for snorkeling in Tenerife…

The other perfect snorkeling spot is the long cliff called Palm Mar Wall between Los Cristianos and Palm Mar town. Less knows and surprisingly easily accessible snorkeling destination. Closer to Palm Mar there a big cave, which is located half underwater, so it’ll be an exciting experience to snorkel there. In fact, the best way is to start your snorkeling tour at the cliff beginning at the end of Los Cristianos and swim along the wall to Palm Mar. Closer to Palm Mar underwater life is more reach and you have quite high chances to see rays resting at the bottom and even meet green turtles.

The other attraction of this spot is that there are floating fish farms in the ocean in front of the Palm Mar Wall and there are also other animals looking for easy food, so don’t be surprised, if you will see a bottlenose dolphin very close to you.

The other perfect spot to snorkel in Tenerife is in the area around the lighthouse Faro de La Rasca, which’s located more or less in a middle way from Las Galletas to Palm Mar.

You can swim in the areas around the lighthouse in direction of Pal Mar and then return and swim from the lighthouse to Las Galletas. Well, if you have iron balls 🙂 because here you can quite often see Cuttlefish, which’s a master of camouflage and even a bit doesn’t remind a kind of cattle.

Along the way there a lot of areas with quite flat waters of 5-20 meters deep and also rocks underwater where often life is concentrated. Except for cuttlefish you can see the rays, barracudas, and octopus.

More towards the North is also perfect snorkeling spots by Abades and Arico, but these spots very depend on weather conditions and you have to choose less windy day don’t fight with big waves there and reduced visibility.

Especially from April to the end of October Tenerife is really a dream destination for water sports lovers and, if you’re one of them, Tenerife offers you a lot of